95 Years Anniversary of the Devastating Earthquake in Jerusalem

On the day of the celebration of the icon of the Mother of God, called the “Three Hands”, June 28 / July 11, the 95 year anniversary of a devastating earthquake in the Holy Land was remembered. On this day, as every year after this natural disaster, a prayer service was performed to the Mother of God with a procession throughout the entire territory of the Holy Ascension Monastery on the Mount of Olives.

After the Divine Liturgy, the Head of the Russian Ecclesiastical Mission, Archimandrite Roman (Krassovsky), along with the clergy of the Mission, Archimandrite Innokenty (Sereda) and Protodeacon Vyacheslav Batalsky, went with the sisters in procession with the icon of the Mother of God “Three Hands”. The Abbess of the monastery, matushka Barbara (Novikova) along with the vice-abbess (namestnitsa) of the convent, nun Catherine (Samara) carried the revered icon. During the procession, the icon was handed over in turn to all the sisters of the monastery who consider it a grace-filled honor to carry the holy image.

The procession stopped at the grave of the father-confessor of the monastery, Archimandrite Methodius (Popovich), who died on this day 25 years ago, and a memorial litia was served. At the end of the procession, prayers were read for salvation from earthquakes. 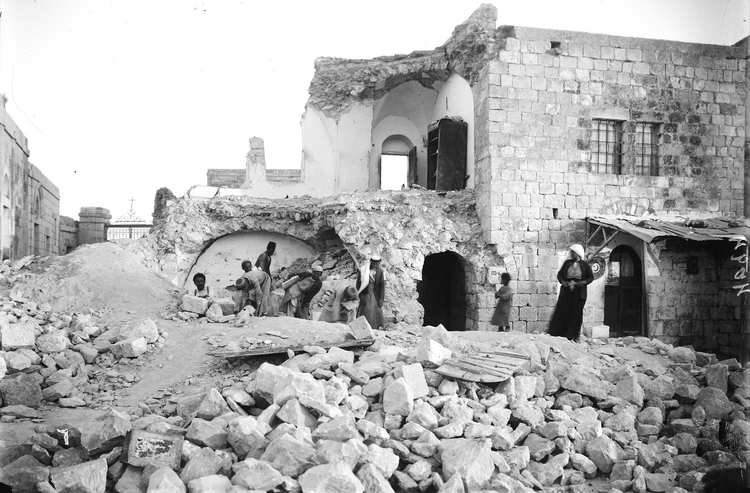 On July 11, 1927, at around 3 pm, an earthquake struck Palestine. the epicenter of the tremor was near the city of Jericho. Approximately 300 people died. The bell tower of the monastery, “Russian Candle”, has took such a dangerous lean that it is about to collapse. But miraculously it remained intact and and remained standing. We publish a photo of a house that was destroyed in front of the gates of the monastery.

From that day on, the sisters of the convent celebrate this incident by thanking the Lord God for His mercy and praying to His Most Pure Mother that She always covers the monastery with her omophorion.