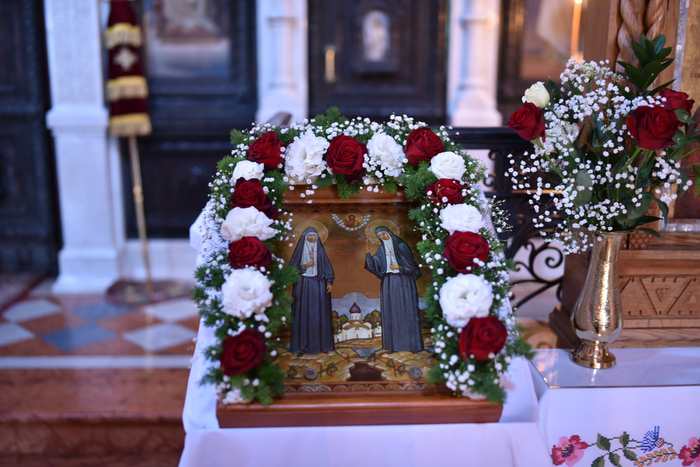 On Saturday, January 30, 2021, the “Royal Church” of St Mary Magdalene, Equal-to-the-Apostles, in Gethsemane, Jerusalem, festive divine services were performed on the 100th anniversary of the arrival of the relics of the Holy Martyrs of Alapaevsk—Grand Duchess Elizabeth and Nun Varvara. In light of this important jubilee, the Synod of Bishops of the Russian Orthodox Church Outside of Russia issued an ukase on July 24, 2020, to celebrate the translation of the relics on January 17/30, and to include this date in Church calendar feast days.

Divine Liturgy was celebrated by Archimandrite Roman (Krassovsky), Chief of the Russian Ecclesiastical Mission in Jerusalem of ROCOR. He was joined by Archimandrite Vasily (Druzhinets), spiritual father of Ascension of the Lord Convent on the Mt of Olives, Hieromonk Feodor (Kiritse) of the Church of St. Mary Magdalene, Priest Roman Gul’tyaev and Hieromonk Afanasy (Bukin) of the Russian Ecclesiastical Mission of the Moscow Patriarchate. Praying at the services were Abbess Elizabeth (Smelic) of Gethsemane Convent, Abbess Varvara (Novikova) of Ascension Convent, and the nuns and worshipers of the convent.

After services, everyone was invited for a festive trapeza luncheon and a showing of Stanislav Tsukerman’s 1974 film “Russians in Jerusalem,” dedicated to the Russian Ecclesiastical Mission in Jerusalem.