The 15th anniversary of the enthronement of His Beatitude Patriarch of Jerusalem and All Palestine, Theophilos III

The head of the Russian Ecclesiastical Mission in Jerusalem, Archimandrite Roman (Krassovsky), together with representatives of the REM MP, took part in the celebrations on the occasion of the 15th anniversary of the enthronement of the Primate of the Church of Jerusalem, His Beatitude Patriarch Theophilos III of the Holy City Jerusalem and All Palestine.

In the Church of the Resurrection of Christ, “the Holy Sepulcher”, a thanksgiving moleben was served in which Fr. Roman took part. After the solemn procession back to the Patriarchate, the official part of the celebration was held.

Representatives of the Russian Ecclesiastical Mission of the Moscow Patriarchate read the congratulatory address of His Holiness Patriarch Kirill of Moscow and All Russia. Fr. Roman presented to His Beatitude with several books in English, published by Holy Trinity Monastery, Jordanville, New York. 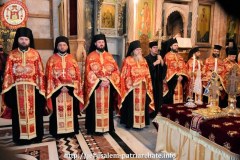