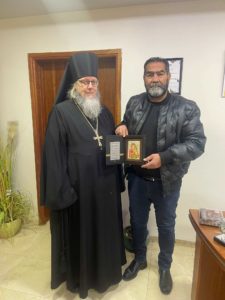 On March 15, the mayor of the city of Kafr Kana (the biblical city of Cana of Galilee) Iz Al Din Amar received the Head of the Russian Ecclesiastical Mission of the Russian Orthodox Church Outside of Russia, Archimandrite Roman (Krassovsky), in his office at City Hall.

During the cordial conversation, Fr. Roman informed the mayor of the city about the ROCOR Mission. During the talks, issues related to the municipality and the Mission were raised.

After the conversation, in hopes of future mutual relations, the Head of Mission thanked the mayor for the meeting and for his time.