Towards the 100th Anniversary of the Russian Orthodox Church Outside of Russia: The First Mother of Russian Gethsemane 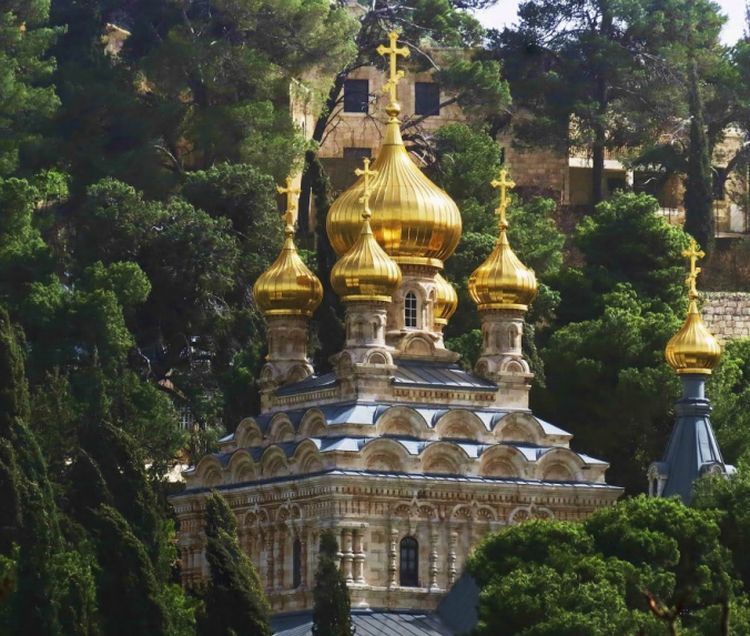 Abbess Maria (Robinson): “The cupolas of our Church of St Mary Magdalene will shine with new gold when the mourning veil is removed as Russia is reborn”. 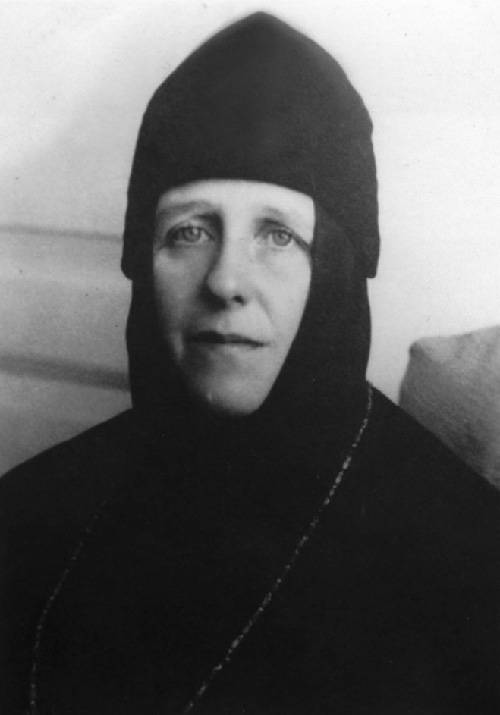 July 8, 2021, marks the 125th anniversary of the birth of the first abbess of the Russian Gethsemane Convent of St Mary Magdalene in the Holy City, Mother Abbess Mary (Robinson). She was one of the most eminent ascetics of the Russian diaspora and the founder of the renowned Orthodox Bethany School for Girls in Jerusalem. Mother Maria heads the pantheon of abbesses of Orthodox convents in the Holy Land. For 33 years she headed Gethsemane Convent. None of the former or present Orthodox abbesses of the Holy Land could overcome this “honorary record” of leadership. Lacking even a drop of Russian blood, Mother Mary chose to serve only the Russian Orthodox Church in Jerusalem.

Abbess Mary was born with the name Marion on 8 July 1896, in Glasgow, Scotland. Her mother was pure-bred Scottish of noble birth. Her father was half-Irish, a presbyter of the Church of Scotland, a graduate of Heidelberg University in Germany who wrote a book about the Lord, Jesus Christ in a New Light, in which he offered his opinion on the Resurrection of Christ, that  the Savior was a bearer of the Spirit. The publication of this book led to his excommunication, shortly after which he succumbed to tuberculosis and died.

At the time, 11-year-old Marion was visiting friends, and on the night of 4 December heard a voice saying that her father is near death. She awoke, frightened, and could not fall back asleep, and the next day she was taken back home because of the death of her father. One can surmise a certain mystical gift that Mother Mary possessed which set her apart from everyone around her. At age 17, Marion herself fell ill with tuberculosis and ended up in a hospital where she had a vision of the Burning Bush. Was it a premonition of future sorrows? Marion Robinson had two younger brothers who died soon after of sickness and depression. Marion’s beloved mother also soon died. She was left with her sister and firmly decided that the early deaths of her close family members showed her the importance of serving Christ the Lord and doing missionary work.

Mother Mary was exceptionally well educated, having studied in the Women’s Collect of St Leonard in Scotland, graduating in 1914. She then completed a two-year course in nursing at Liverpool Children’s Hospital, studying pediatric diseases and care for children. She graduated with honors in 1919. She then completed a five-year course in medicine at London Hospital, graduating in 1923 with honors. Finally, she studied social sciences at Belford University in London, receiving a diploma in 1926, after which she worked in the government. She was confirmed in High Church in London’s St Paul Cathedral and became a novice in Poona, India, the Diocese of Bombay. She was given blessing to establish a mission center there, a prayer house, a medical clinic for those suffering from spiritual and physical ailments. On August 10, 1929, she was tonsured a nun in the High Anglican Church, making lifelong vows and given the name Stella. 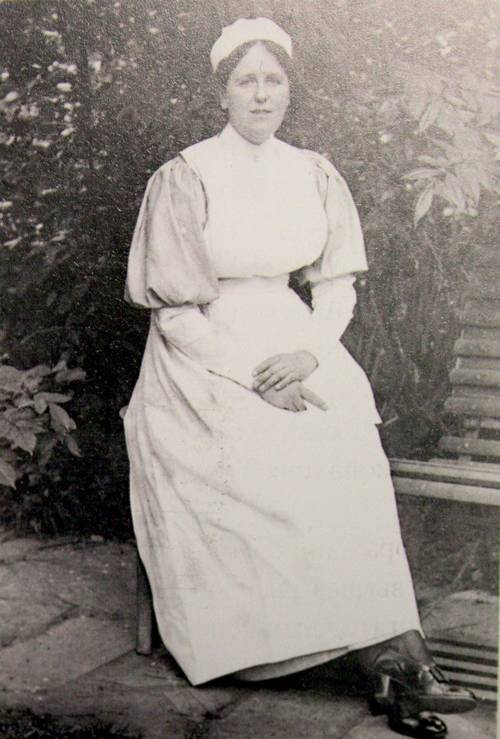 Marion Robinson in a nurse’s uniform in the 1920’s.

In early 1932, two British nuns of Scottish descent, Sr Stella Robinson and Sr Katrine Sprot, settled in one of the cottages in Russian Gethsemane built in the 1880’s by the great founder of Holy Russian Palestine, Archimandrite Antonin (Kapoustin). They had decided only to visit the Holy Land on their way to India, but their acquaintance with Sister Valentina and Archbishop Anastassy (Gribanovsky) changed their minds. Seeing the poverty of Russian Gethsemane and the Bethany site, they decided to help. And so the selfless cooperation of nuns of another faith began. The two Scotswomen, who were from influential families, obtained the assistance of the British Mandate authorities in Palestine, which also spread to the Russian Ecclesiastical Mission in Jerusalem as a whole. A large role was played by the fact that Gethsemane contained the remains of a granddaughter of Queen Victoria, the sister of the last Russian Tsarina Alexandra, Grand Duchess Elizabeth. This fact was emphasized by Sr Stella whenever she addressed the British administration. Their work in establishing an Orthodox community drew them closer to Orthodox Christians; they began attending divine services at the Church of St Mary Magdalene, and Sister Valentina (Tsvetkova) helped them learn Russian and Church Slavonic. In September, 1933, both nuns converted to Orthodoxy, and regained the names given them at baptism—Mary and Alexandra.

Soon, with the blessing of Vladyka Anastassy, a dormitory was established in Bethany headed by Sister Mary. In August, 1934, Sister Mary was tonsured a nun in the Church of St Mary Magdalene. Three months later, Vladyka Anastassy tonsured Sister Alexandra and Sr Valentina, who were given the names Martha and Barbara. Vladyka Anastassy decided that the sisters would work on their inner life, like St Mary, in Gethsemane, and in Bethany they would serve their neighbor, like St Martha. Nun Mary was appointed to head Russian Gethsemane and be the caretaker of the crypt of Grand Duchess Elizabeth and Nun Barbara. Nun Barbara was appointed to help her, and Nun Martha was sent to Bethany. And so a small community was formed. In the fall of 1936, Nun Mary was elevated to the rank of abbess and given the ornamented pectoral cross. Convent life in 1939, at the outbreak of World War II, was difficult, but thanks to Mother Mary, who donated her entire inheritance to the monastery, and the support of relatives of Nun Martha, material help was provided. The entire time, Abbess Mary sought to correspond with Metropolitan Anastassy (who left for Europe in 1935, and from 1936 was the Primate of the Russian Church Abroad), the first news was received through the Red Cross only in 1944. Still, church services continued in Gethsemane according to the monastic rule of the Russian Orthodox Church under the guidance of Archimandrite Seraphim (Sedov). 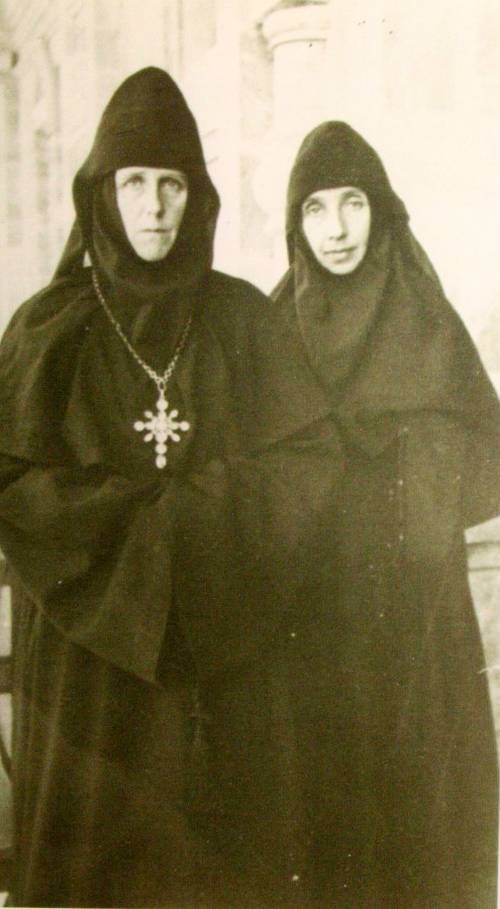 In 1948, the British Mandate in Palestine came to an end, and that May the Arab-Israeli was began which changed the situation in the region. Military actions took place everywhere. Mother Mary and Mother Martha, as British subjects, were often invited to return home, but they staunchly refused. Abandoning the nuns and the great relics of SS Elizabeth and Barbara was out of the question under any circumstances. The fact that the healing relics of the two holy women of Alapaevsk remained intact to this day is a great accomplishment of Mother Mary among others. The doors to Bethany and Gethsemane were opened to Russian and Arab refugees, who were many, and even the caves of Russian Gethsemane became occupied. Divine services continued without interruption.

The war divided Jerusalem and Palestine between the new nation of Israel and Jordan. By that time, Stalin developed a strategic interest in the nations of the Middle East, and the Soviets announced their claim to the Church property of Tsarist Russia in Palestine. The Israeli government, which controlled the territory where most of the properties were that were once acquired by Archimandrite Antonin for the Russian Ecclesiastical Mission in Jerusalem were located, preserved for so many years by the tortured Russian people who were deprived of their homeland, decided to appease the USSR. Persistent efforts were made to convince the authorities of Trans-Jordan to hand over Russian parcels to Moscow. Pressure was likewise applied to the Jerusalem Patriarch, who tried to influence the Chief of the REM at the time, Archimandrite Antony (Sinkevich). Despite the unwavering stance of the Royal Family of Jordan, the situation surrounding the Russian monasteries on the Mt of Olives and Bethany was complicated. 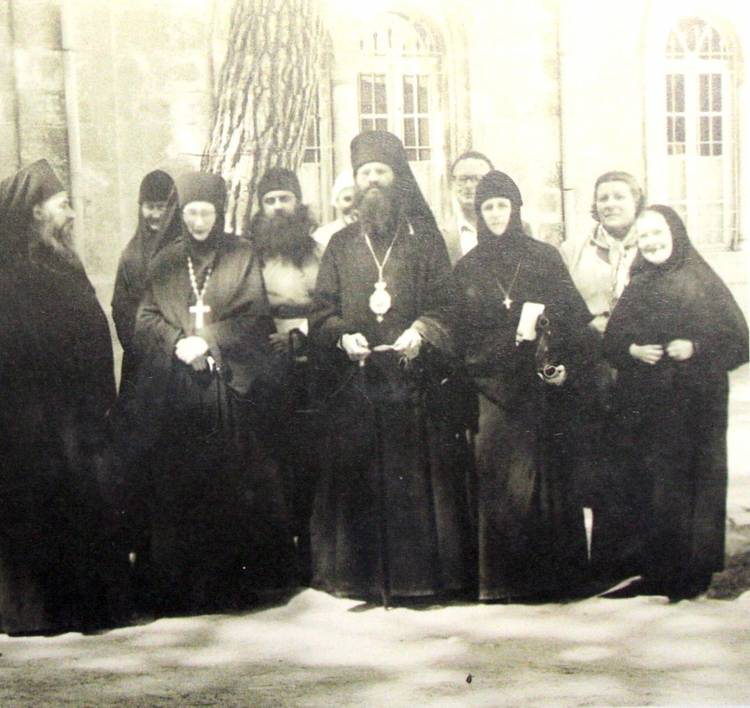 Mother Mary feared for the fate of the community and the crypts of SS Elizabeth and Barbara she was entrusted with and traveled to London; from there she was able to travel to Munich and see Metropolitan Anastassy. Ties with the leadership of ROCOR were restored, and Fr Dimity (Byakai) was soon sent to the Holy Land, assigned the spiritual father of the Bethany Community and later Chief of the Mission. A group of nuns from Europe came with him. It was at Gethsemane under Mother Mary that the great abbess of Mt of Olives Convent emerged, Abbess Tamara (Grand Duchess Tatiana Konstantinovna Romanova-Bagration-Mukhranskaya).

From the moment the community was formed, the “lower house” of Russian Gethsemane was no longer leased out, and the abbess’ quarters, nuns’ cells and chancery established. A bit up the hill another building was erected with four large residences (which is now a pilgrims’ hostel), in which nuns also lived. Some sisters also lived in the lower premises under the church.

After 1948, the material situation of the convents of Jerusalem which remained under the auspices of the Russian Church Abroad were further complicated because they lost the revenue from formerly-leased properties which the State of Israel confiscated. The means of support for the community was help from the Synod of ROCOR, pilgrims’ donations, and income derived from the nuns painting icons, sewing vestments, textile work, translations and teaching. The basis of the funding remained the resources of Abbess Mary and Nun Martha.

Gethsemane and Bethany continued their noble and God-pleasing continuation of the work of Mary and Martha of the Gospel, and of Holy Grand Duchess Elizabeth. Young, educated nuns— Russians and Arabs—worked together in the monastery’s school for Arab girls, worked as missionaries, protected Orthodox Christianity in the Holy Land, published missionary bulletins in Arabic, which with the blessing of His Beatitude Patriarch Timotheos were sent to local parishes and Orthodox churches in the Middle East. In addition, voluminous correspondence of a religious and educational nature was maintained in the Orthodox towns of Palestine, and contacts were established with their parishes. During Passion Week and Pascha, Bethany welcomed Greek pilgrims with whom they maintained friendly contact and correspondence.

In the early 1950’s, with the blessing of Metropolitan Elias, a convent was opened in Lebanon. Its future nuns spent more than a year in the Bethany Community of the Resurrection of Christ, preparing for their monastic service. The Bethany School produced pious Arab nuns for the Orthodox Church. They scattered throughout the world: Chile, Argentina, France, England and Greece. In Chile, they organized a monastic community on the lines of Bethany— which included a children’s orphanage dedicated to St John of Kronstadt, in London the Annunciation community was established. Of course, many of them supplemented the convents on the Mt of Olives. Today, Orthodox Bethany School, overseen by Gethsemane Convent, is one of the most renowned and respected schools in the Middle East. It would be fair to devote this great school in Bethany to the memory of Mother Abbess Mary on this 125th anniversary of her birth and the 100th anniversary of the Russian Orthodox Church Outside of Russia.

Mother Mary quietly departed in the Lord on November 7, 1969, at the age of 72. She was buried with great honor on the territory of Gethsemane’s St Mary Magdalene Convent of the Russian Church Abroad, which she had ruled for 33 years. Her grave is one of the most revered in all of Gethsemane. 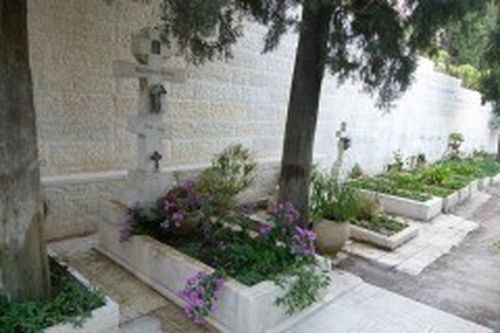 The grave of Mother Mary (Robinson) in Holy Russian Gethsemane

The name of Mother Abbess Mary is inscribed in gold in the history of the Russian Church Abroad and her presence in the Holy City of Jerusalem. Not at all Russian by heritage, Mother Mary enriched the Russian Orthodox Church Outside of Russia through her great efforts of humble monastic effort—building, showing mercy and compassion. Eternal memory to her!